Alas, poor Yorick! I knew him,
Horatio. A fellow of infinite jest, of most excellent fancy.
— Act V, Scene 1 (Hamlet, with Horatio)

The map is not the territory, but neither is a random (gaussian noise) sample, but they are both starts. They are better than nothing{the trivial group} or doG. And when they are combined intelligently, they are an unbeatable combination.

“You can’t beat first order statistics”— the herd(strong correlation),
— unless you know the first order correspondences too,
and you don’t get in the way.

… was the right answer for me at the time. But in a crazy and 40 years from recall, the answer was luckily wrongly incomplete.

No, it wasn’t Yorick who answered. That’s not right, he is dead? No, Yorick isn’t dead, he is a fictional CHARACTER. Can fictional characters, die? Or when do they die?

There is no correlation there? What is the correspondence?

Well, ACTUALLY, it was Yorick. Yorick Wilks, one of my professors I recruited at the time — The surface correspondence was in the first name. Correspondence versus Correlation. Correspondence and Correlation. Big difference, as my father would have said. But, he is dead. Dr. David Keirsey is dead. I am Dr. David Keirsey, and I am not lying. But I could be lying down, at this moment, you read this — nobody knows: you, me, my father, Yorick, Yorick, and doG.

Yorick Wilks’ answer, at the time, was a comment to me about the philosophical notion of “truth”. He presented me with a similar gedanken situation as below.

Suppose, a friend who is not particularly aware of details, had a watch (the old kind) but he hadn’t paid any attention to it (you know a crazy nerd like me). And this watch was broken — it had stopped. You happen along and ask “What time is it?” Further suppose, it had been 2 o’clock, at the time, and he looked at his watch and said, “it’s 2 o’clock”

Yorick proceeded to say essentially: The friend is saying the “truth” but he is not telling truth. There is a difference between saying the truth by coincidence and telling the truth for the “real” reason.

Ok, correlation is not causation.  And Knowledge is not reality and provisional (some say contingent).  Check. Got it. On with life, PhD, family, and c/a/r/e/e/r.

But what was my question? Then and now. Well, actually, questions — plural. The question is different from then and now. And the answer(s) are different too.

You see I, had, and have, learned a lot about Chemistry and Biology before and since:  Human and the Universe.
And I had read a book when it first came out, in 1968, that inspired me as a kid, called The Double Helix, by James Watson. 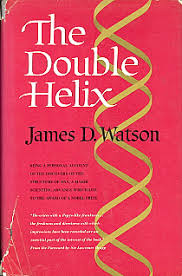 Yes, James Watson, you got it totally right and totally wrong. Now he is getting it crazily right and madly wrong. In Greek, it’s called S c h i z o | p h r e n | i a, in plain old English, is it called “all messed up”.

He is Brilliant, He is Stupid, He is Knowledgeable, He is Ignorant.

He is Brilliant and Messed Up

He is a Scientist.

But not like many of us, he is a Nobel Prize winning Scientist.

AND he has this new Crazy stupid theory.

Which I know to most likely be *really* crazy right and madly wrong.

He is: Human and is Labelled: James Watson

James Watson and Frances Crick with their MODEL of the STRUCTURE of DNA.

Jim Watson has this theory about Autism… and he has these “statistical” (?how random?) thoughts about Schizophrenia.  But how does it WORK?  Oh, you are not a Chemist!?

S c h i z o – p h r e n i a   (split mind, in greek)  the word has been used and abused for over a century.  The psychiatric community can’t tell who is crazy or mad. There is the MYTH of mental illness. What IS the RELATION between correlation and causation?

Jim didn’t know much about Chemistry or the Human Brain.

Should Jim Watson be given electro-shock treatments, given anti-psychotic pills for his ideas like John Nash!?.

(James Watson, an Mastermind Rational, thinks that he could be wrong, but he doubts it) — I do too.

“Though this is madness, yet there’s method in it” — Shakespeare

One thought on “Yorick’s Answer”